Before we get to the wine itself, with probably the longest name I’ve ever included (see below), let us first have a quick glance at the Alsace Grand Cru vineyard it comes from – Altenberg de Bergheim – and its producer – Gustave Lorentz.

Somewhat confusingly, three of Alsace’s fifty one Grands Crus are named “Altenberg”, but it makes more sense when you realise that the name means “Old Mountain”, and so could easily be applied to several places in Alsace. Confusion is reduced by adding the name of the commune in which the vineyard is located, hence Altenberg de Bergbieten, de Bergheim, and de Wolxheim. The first and last of these are villages in the north of Alsace, 30 to 40 km due west of Strasbourg. Bergheim is in the heart of the Alsace vignoble, just north of Ribeauvillé, and its Altenberg has been renowned for its wines since the 12th century.

This Grand Cru totals 35.06 hectares and lies between 220 and 320 metres above sea level. The soil is a rocky, fossil-laden mix of marl and limestone from the middle and lower Jurassic period. The aspect is due south, with a small stream at the bottom of the slope which slightly tempers the microclimate. All this adds up to wines which are very concentrated and mineral, often a little closed in their youth, but which reward cellaring for five years up to several decades. Riesling and Gewurztraminer are the stars here.

The Lorentz family count three dates as important milestones for their winery: 1650, when the first ancestor moved to Alsace, 1748 when the family moved to Bergeim, and 1836 when they began producing their own wine.

Their Réserve range is popular in Ireland and widely available. I’ve enjoyed several vintages of their Réserve Riesling and Réserve Pinot Blanc, plus their L’Ami des Crustacés blend is well worth a try. Their full range is summarised in the appendix to my review of their Pinot Blanc mentioned above, but the jewel in the Lorentz crown is undoubtedly their holdings in Altenberg de Bergheim, planted to Riesling and Gewurz. In fact, with 12.77 hectares they account for just over a third of the whole Grand Cru. 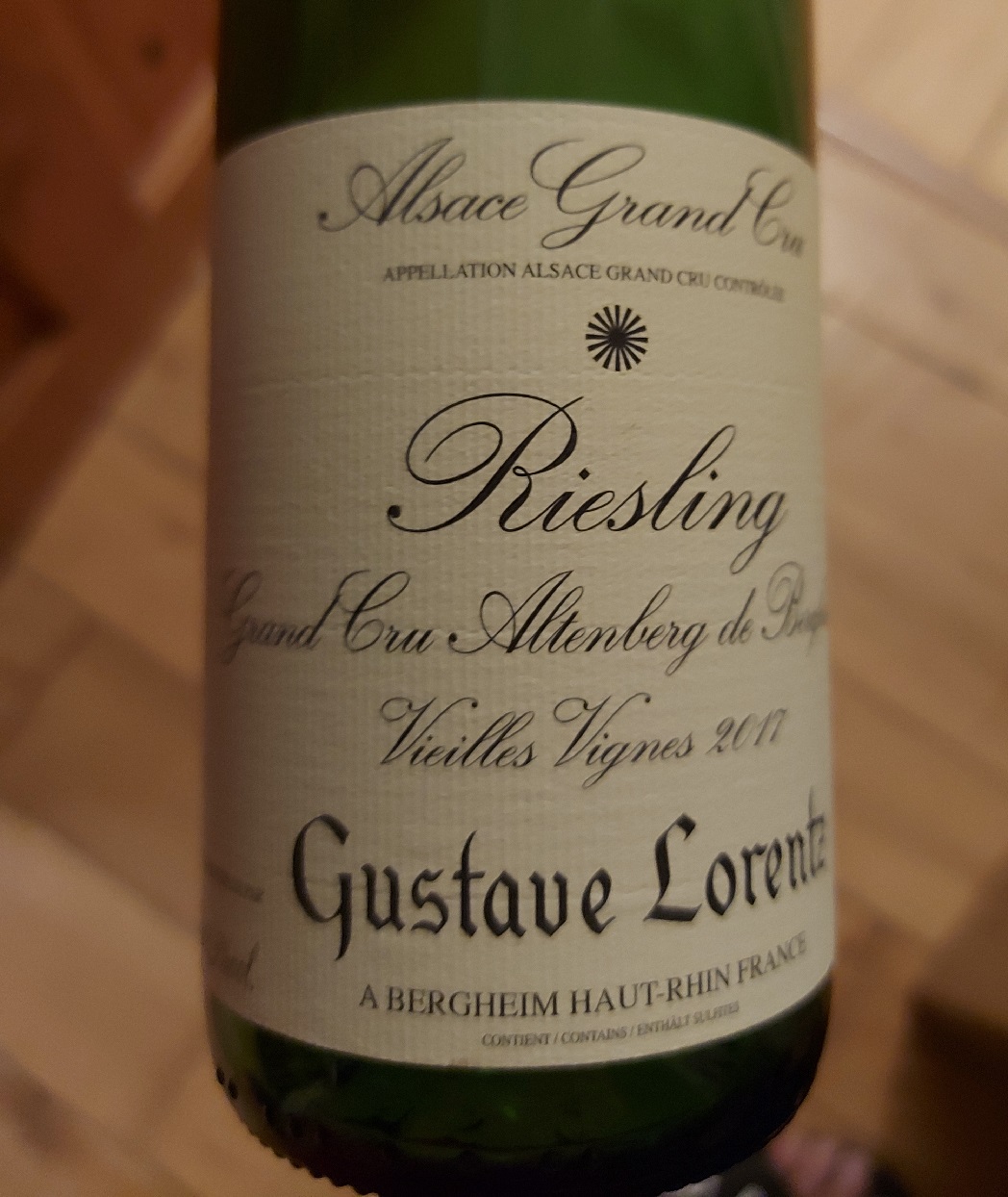 Not only is this a Grand Cru wine, but it also has the designation Vieilles Vignes, or “Old Vines”. All the vines whose grapes went into this wine were over 30 years old, with a few even approaching 50. This is said to give increased concentration of aromas and flavours, so let’s put this theory to the test.

In the glass it pours a vibrant, deep lemon which is already turning to a light gold. The nose shows minerals, lime and lemon, with just a hint of richer fruits. Scientists say that there is no known mechanism for minerals to actually be absorbed by vines, and make their way to the flavours of a grape, yet here we have stark evidence that minerality can even be prominent among a wine’s aromas.

This is a concentrated, dry, fresh wine. On the palate there’s lots of texture and an underlying richness, without any exhuberance. Whereas lighter Alsace Rieslings would be paired with shellfish, white fish and the like, this Alternberg has the power and concentration to cope with richer foods; Gustave Lorentz recommend matching it with all manner of foods, from goat’s cheese, to lobster, to fois gras or even plum tart – truly a versatile wine.

At five years old this 2017 has just entered its recommend drinking window, so now is the time to start supping, but I think this has decades left it in and hasn’t got close to its peak yet.

View all posts by frankstero

This is a text widget, which allows you to add text or HTML to your sidebar. You can use them to display text, links, images, HTML, or a combination of these. Edit them in the Widget section of the Customizer.
Join 1,001 other followers